Hemorrhoids are a common problem of the anus and rectum. They occur when the veins around the anus or lower rectum become swollen and inflamed, often as a result of straining during a bowel movement, sitting for long periods of time, or long-term constipation.

The term hemorrhoid refers to a condition in which the veins around the anus or lower rectum are swollen and inflamed.

Hemorrhoids are common in both men and women. About half of the population has hemorrhoids by age 50.

Internal hemorrhoids are classified according to a system of grades.

Grade Four hemorrhoids protrude from the body all the time. If pushed back in, they will slip out on their own shortly with no effort required. Hemorrhoids this severe need to be seen by a doctor, as they bleed much more easily, are prime targets for infection, and may develop an internal blood clot, also known as thrombosis.

One of the most common causes of hemorrhoids is straining to pass hard, dry stools during bouts of constipation. Other factors that can lead to hemorrhoids include:

WHEN TO SEEK CARE

Generally, hemorrhoids are not serious and symptoms go away in a few days. However, sometimes hemorrhoids may signal a more serious problem. See your health care provider if any of the following occurs:

Persistent pain. In some cases, hemorrhoids must be removed surgically. Your doctor will perform an exam and decide on the best course of treatment. 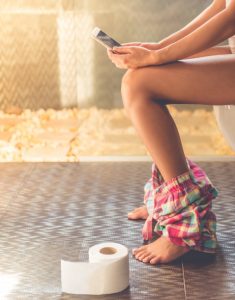 Take the following steps to reduce your risk of hemorrhoids:

Eat more fiber and drink plenty of fluids. This will help soften stools and promote regular elimination, which reduces straining.

Go when you feel the urge to have a bowel movement. Delaying now can mean straining later.

Don’t read on the toilet. Sitting and straining too long encourages swelling.

Treating hemorrhoids may require nothing more than home treatment and lifestyle changes. For instant relief of pain, itching and swelling, try the following:

Apply a hemorrhoidal cream or suppository to the affected area as directed.

Use ice packs, which can reduce swelling.

Soak in a warm bath or “sitz” bath (sitting in three inches  of water) for 10 minutes a few times a day.

If these changes do not help, your health care provider may suggest a fiber supplement or a stool softener

In some cases, treatment may require a surgery or procedure. Some situations where hemorrhoid surgery may be recommended include: Hemorrhoids that bleed repeatedly, Prolapsed hemorrhoids, Thrombosed hemorrhoids, Extremely painful hemorrhoids.

Four types of surgery are generally recommended to treat hemorrhoids. These options include:

The following is a quick summary of treatment for internal hemorrhoids by grade: